Inspired by the water tower situated on the Island, Andrew Chan’s Resident Alien was positioned in proximity to the water tower so as to underscore the relationship between the extraterrestrial sculpture and its mothership, the water tower. This work appropriated the iconography of 1950’s horror and sci-fi films, substituting the red scare of communism’s nuclear holocausts with the fear of mass immigrations’ terrorist Armageddons. The sculpture was constructed out of painted pressed tin over a lightweight metal alloy frame. 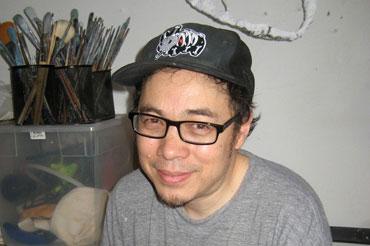 Andrew Chan’s work is a commentary on the world of consumption from popular consumer products to war machines. He is interested in these objects not as polished or new but as degraded and obsolete — stripped down and recast into relics or depicted in worlds so full of various conflicting anachronisms as to create unique stylistic environments. He studied at RMIt University, Melbourne, Australia (BA, 1995), and New York University, New York, New York (MFA, 2001).